Risks of Recession versus FOMO and the Case for Conservative Investing

The recession alarms started sounding during August of 2019. The media was consistently hitting it on all fronts. It may have been politically motivated or there might be something to this. Various economic reports came in during September that quieted the frenzy, yet the underlying tone is one of caution. FOMO is the Fear of Missing Out. The stock market is up around 20% year to date. The possibility for a correction or worse is always on the horizon. One may ask why the stock market is so strong when the media has all but told you the sky is falling. The sky is NOT falling. There is some deceleration in various economic data. The Wall Street axiom, “Don’t fight the Fed”, is still true today. The Fed has lowered rates twice in the third quarter of 2019. However, the Fed’s future path is murky. The consumer has been strong and bolstered by a strong labor market. FOMO has indeed kept the market momentum positive. Consequently, this same fear can turn from a positive to a negative very quickly. Investment strategy is not a static decision based only upon economic numbers, corporate profits and strong balance sheets. Long term investing is a process that incorporates data analysis and considers investor psychology, market momentum either positive or negative and risk aversion. Some things in the economy can cause a self-fulfilling prophecy leading to negative sentiment and potentially a recession. 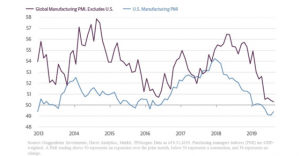 The US is a service driven economy as are most of the global developed countries. However, we still worry about a manufacturing slowdown since historically it has led to a recession. You can see that the Purchasing Managers Index (PMI) is starting to show some weakness. This trend clearly started as the trade war heated up. The Global PMI lags the US PMI and as one can surmise, is indicative of how recession risks have the ability to spread globally. If manufacturing continues its decline, layoffs happen; when layoffs happen, consumer sentiment starts to sour and consumer spending slows. This is a real concern. One dip below the neutral line in the PMI data does not signal a disaster, but we will be watching this indicator closely. As it stands right now, most things related to the consumer are strong: retail sales, home prices, jobs, wage growth and consumer sentiment. We would like to point out that the PMI is a diffusion index based on what company financial officers, across a broad spectrum of industries, think is going to happen in the future. No one knows the future and this index is certainly skewed by the uncertainty caused by the trade war with China. If the US can come to an agreement with China, either all encompassing or one that removes tariffs and sidelines other details, it is all but certain the PMI trend will shift upwards. There are reasons to be cautious, but there are reasons to be optimistic. 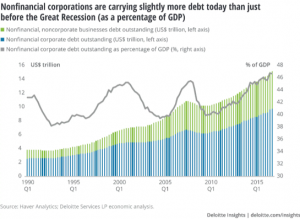 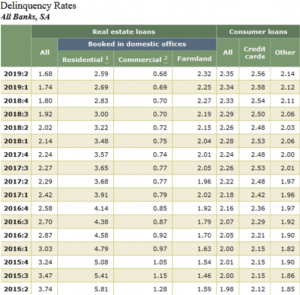 The US national debt is projected to increase over $1 trillion a year for the foreseeable future. The balance now exceeds $22 trillion and has the highest concentration of continuous obligations in the history of the US. These obligations include Social Security, Medicare and many forms of government assistance. The overall level of debt might be more manageable if it weren’t for the continuous obligations. In other words, during WWII, the national debt was at a similar level relative to GDP, however, it was reduced quickly when the war effort ceased to exist. That is not the case today. Current interest rates are not reflective of the current debt burden. One should logically think that interest rates will go up. We are watching long term rates for signs of distress, but rates will stay low as long as global central banks continue to manipulate them. Corporate debt has increased to levels slightly higher than they were before the financial crisis. There is some concern here, however, corporate debt interest coverage is much stronger today because of such low rates. There are a couple pockets of weakness in consumer debt, low quality car loans and low quality revolving lines of credit. The most impressive strength is reflected by the continual slide in real estate defaults and the average US home owner is sitting on the highest levels of home equity versus debt in over 10 years. The theme continues to be: the consumer is strong.

The consumer data is strong. You might conclude the media is creating a stir that is unwarranted. This could be proven to be correct, but it is just too early to tell. One thing is certain: uncertainty. We don’t want to fight the Fed; it hasn’t been a good idea in the past. However, the Fed has not been consistent in its pronouncements, actions and delivery over the last 18 months. This causes us some concern. Manufacturing is slowing down and uncertainty amongst corporate CEOs is definitive as measured by their statements during earnings updates and lack of corporate spending on new investment. Another concern of ours is that additional deterioration in manufacturing may derail the consumer through a negative economic feedback loop. We acknowledge the positives but are weighing the headwinds. As the old adage goes, its better to be 2 hours early to the airport than 10 minutes late. In this vein, we think it is prudent to maintain our conservative investment style, maintaining larger positions of cash and less equity investment in the most expensive stocks. Over the coming months our moves may become more conservative as we watch the developments in the trade war. In our opinion, an appreciation of risk is more important now than ever.

What is an Exchange Traded Fund (ETF)?

Most investors are familiar with mutual funds, but how familiar are you with their relatives,…

What is a Real Estate Investment Trust?

A REIT, or Real Estate Investment Trust, is much like an equity mutual fund in…

“Far more money has been lost by investors preparing for corrections, or trying to anticipate…