The last few months have been a tumultuous time in the stock market. Nerves and stomachs have been tested. During these times it is of the utmost importance to remain focused and stick to the overall plan that you have mapped out with your advisor. More often than not, overreacting can cost you more than riding out the storm.

A correction is defined as a 10% short-term drop in the market. When you invest in the stock market, these declines happen. There is no getting around them. Remember that no one really knows when one is going to take place. As Peter Lynch, Manager of the Fidelity Magellan Fund for 13 years, said, “That’s a euphemism for losing a lot of money rapidly. That’s what a “correction” is called. And a bear market is 20-25-30 percent decline.”

Bear Markets are longer term downturns of more than 20%. These likely precede a slowdown in the economy. With these downturns we, as advisors, try to limit your exposure. We will never advocate selling wholesale positions out of stocks, because again, timing a bear market is almost impossible.

Here are a few reasons to make sure you stay invested during these volatile times: 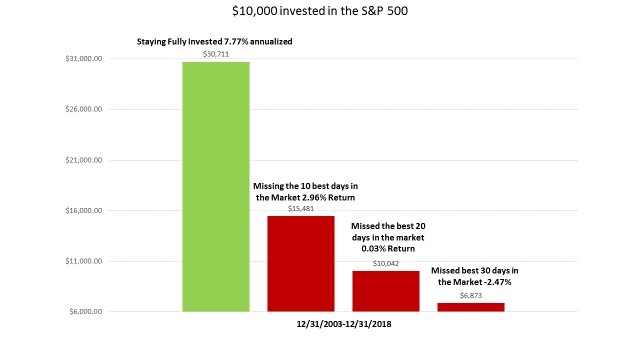 If you look at even a shorter time frame than 15 years, let us look at 2018 during record volatility. These numbers implore you to stay invested.

If you are uncomfortable with the amount of risk your portfolio has, please let your advisor know. It is always important to revisit some conversations on aversion, or appetite for risk after a year like 2018. Investors’ situations and goals change, so it is important to keep us all on the same page.

“When an investor focuses on short-term investments, he or she is observing the variability of the portfolio, not the returns – in short, being fooled by randomness.”

If the Federal Reserve is Raising Interest Rates, Why Aren’t Long-Term Rates Going Up?

What is the Fed Doing? The Fed has been taking its time raising the overnight…

What to Expect from the Fed for the Rest of 2019

The Federal Reserve has attracted much attention recently for how it has managed interest rates.…